April 22, 2021 will be the 51st Earth Day. What started as an educational initiative in the United States has evolved into an annual global event to advocate for the environment.

The roots of Earth Day go back as far as the 1962 publication of Rachel Carson’s Silent Spring. That was the first impetus that made Americans aware of the effects of pollution. On January 28, 1969, an oil well off the coast of Santa Barbara, California spilled three million gallons of oil and killed more than 10,000 sea creatures and birds. The news coverage caused an increase in public awareness and support for the environment. Then, at the 1969 United Nations Educational, Scientific and Cultural Organization (UNESCO) Conference, a proposal was made to honor the Earth on March 21, 1970; the day of the vernal equinox, also known as the first day of spring. The United Nations still observes Earth Day on March 21 and rings a Japanese peace bell at the exact moment of the equinox.

Senator Gaylord Nelson (D-Wisconsin), inspired by the youth activism at the time, proposed a national environmental teach-in day for April 22, 1970. He chose that day because it didn’t interfere with finals and most students would still be on campus. He recruited Dennis Hayes, a youth activist at Stanford University, to oversee coordinating activities. Senator Nelson provided his office staff to help Hayes. The United Auto Workers union was the largest financial contributor and provided office supplies. Hayes later said the first Earth Day wouldn’t have been possible without their support. Hayes changed the name to Earth Day which caught on with the media. He is still on the board of the organization today.

The first Earth Day in 1970 was celebrated in over 10,000 schools across the country and many cities including New York, Philadelphia, Washington DC, Chicago, and Los Angeles. Here in New York a group of Columbia University students got Mayor Lindsay to close part of Fifth Ave for the occasion. He also made Central Park and Union Square available for festivities. Paul Newman and Ali McGraw spoke in Union Square to much press coverage. In Philadelphia, Senator Edmund Muskie, Ralph Nader, Allen Ginsburg, and Harvard biochemist George Wald spoke. In Washington DC, Pete Seeger performed and members of Congress gave speeches. It was later that year that bipartisan support established the Environmental Protection Agency (EPA) and the Occupational Safety and Health Administration (OSHA). The Earth Day organization has helped advocate for many environmental protection laws since then, including the Endangered Species Act.

Since 1970, the event has grown and evolved. By Earth Day 1990, the event could be promoted on the internet and over email, as well as on television. Funding was in the millions, allowing the event to go global. Over 140 countries participated. That year, the focus was on recycling. There was a live phone call from the state of Washington to an international group of climbers on Mount Everest. The team of climbers from China, Russia, and the United States collected two tons of trash from the mountain. In 1995 the website earthday.org was established. By Earth Day 2000, 184 countries had joined in. Almost half of a million people gathered on the Washington Mall to hear Leonardo DiCaprio and others speak. In 2017, the organization coordinated with the March for Science, a group that advocates for science literacy and evidence-based policies. The 50th Earth Day in 2020 was celebrated on-line due to the COVID-19 pandemic, another example of the effects of environmental issues. The focus had shifted to citizen science and community engagement. There were three days of live stream events, with Bono, and even Pope Francis joining in.

Earth Day is now considered the largest secular event in the world. This year’s theme is Restore Our Earth, with a focus on clean-up events particularly in areas disproportionately affected by climate change. To learn more about the organization and this year’s activities, go to earthday.org. 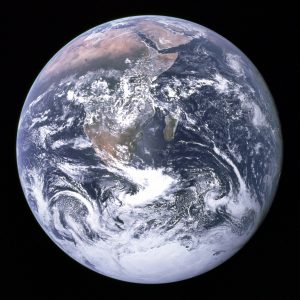