Vaccine FAQ: What is it like to get the COVID-19 Vaccine?

Yes, there have been bumps in the road to rollout the coronavirus vaccine, with people who are fully eligible having trouble getting vaccination appointments while refrigerators full of doses languish unused. Those of us who worry about equitable medical treatment for marginalized populations are staying politically hypervigilant, and many are trying to help older family members and neighbors navigate New York City’s convoluted online appointment system.

But hope is in the air as we see more and more of the public vaccinated. We can almost picture ourselves in a post-COVID world replete with ball games, theatre, in-person school, and hugging.

I informally polled a number of vaccine recipients (i.e., everyone I know who has been vaccinated) to hear their stories.

David Jay Smith, a Patient Representative at Memorial Sloan Kettering Cancer Center, works at the Rockefeller Outpatient Pavilion on East 53rd Street. He was vaccine-eligible because his job entails daily, direct contact with Sloan Kettering cancer patients. David received both doses of the Pfizer vaccine in January. Everything went smoothly. He got his appointments through his employer, was vaccinated at the hospital, and has experienced no side effects at all.

“I feel physically fine and getting the vaccine has been a positive thing for me emotionally. I was informed that I can still contract COVID, and can still be a carrier, so I’m taking all of the precautions I’ve been taking all year, but I believe that if I do contract COVID I will have a much milder case.”

“We were so happy to see everyone and get hugs,” Bru wrote to me, “It felt really good! That is what I have missed the most. Human touch. Fortunately, Ray and I have each other. There are so many people here who are widowed. They tell me all the time that we are so lucky to have each other.” Still, she was nervous. She wrote, “I was very reticent. I was not sure that we were totally safe. It was all family members, but still…”

The Lopezes live in The Buckingham, a retirement community in Houston, Texas. Their age made them a high priority to be in the first wave of vaccine recipients.

Bru explained, “They told us that Walgreens would be here on January 5 and again on January 26, and The Buckingham nurse called every resident and scheduled an appointment time. They administered 400 Pfizer vaccines to residents and staff. The shot was very quick, and we hardly felt it. My arm was a little sore the next day, but Ray did not have any problem. I guess you could compare it to a flu shot.”

The Lopezes and others in retirement communities and assisted living facilities are fortunate to have institutions working the system for them. I myself got a call from my mother’s nursing home, Braemar Living in Middletown, NY, saying that all residents would receive the vaccine. My mom didn’t even need an appointment. I gave my permission, and she received her first shot the same day.

New York City senior citizens who live on their own are having a tougher time getting vaccinated. Monica Liriano, a Market Research Executive in Jackson Heights, Queens, had to navigate several different websites before she could get her mother, Lady, an appointment.

“I feel like the appointment we finally got was a fluke. I was convinced we were going to show up and either it wasn’t a real thing, or she’d get turned away,” Monica told me. But once they arrived at the vaccine site at Newtown High School in Elmhurst, everything went smoothly. “All in all, the process took thirty minutes, there were no lines, no waiting outside and everything was really well organized. Also, no weird questions or directives—only that her arm might hurt and she should ice the area.” Monica was also pleased that the intake nurse made Lady’s second appointment right on the spot.

Lady was a bit nervous to get the vaccine at first, but now that she has had her first Moderna shot, she’s telling all her friends to get it too. Unfortunately, appointments are still very hard to make.

Unlike Lady, who experienced no pain or side effects, Aisha Mabarak, a staff member at a Child Advocacy Center in Brooklyn, had a bad reaction to her first Moderna shot and she has decided to follow the CDC guidelines* and not get her second.

“At minute ten of the fifteen-minute observational period after the shot I noticed my right hand was quite swollen,” Aisha told me. “A staff member called an EMT who came to my seat and, when he saw my hand, he moved me to a separate area where he checked my vitals. My heart rate was normal, but my blood pressure was a little elevated.” The on-site physician suggested she go to the ER as a precautionary measure. But Aisha hesitated (“You know, COVID and all.”) and soon the swelling subsided.

Aisha also had trouble making that first vaccine appointment. As a front-facing counselor who works alongside law enforcement and Child Protective Services, she was eligible right away, but her place of employment did not arrange for her to be vaccinated. Staff had to handle the system on their own. People whose employers arrange for vaccinations have a much easier time of it.

NYPD Sergeant Gerard Walker and Dr. Benjamin tenOever of Mt. Sinai were lucky to have their employers provide the vaccine. 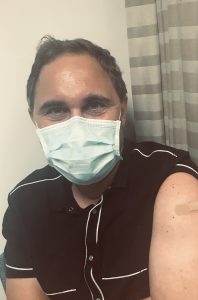 Ben, the Fishberg Professor of Medicine and Director of the Virus Engineering Center for Therapeutics and Research at Mt. Sinai, was enrolled in the Phase III clinical trial for Pfizer. “We received either placebo (saline) or the vaccine,” Ben told me. “It was a blinded study, but it was very apparent what each person received based on whether their arm was sore the next day.”

Ben had to maintain a “COVID diary” thereafter to report on any symptoms he might be experiencing. He also had to promise not to get any other vaccines in the interim and, interestingly,not to have unprotected sex with anyone during the three-week period between shots. He felt totally fine after both shots, but, he says, others in the study developed fever and body aches after the booster.

“I’m glad the process is over,” he told me after he received his second Moderna shot at an NYPD shooting range in the Bronx that had been transformed into a testing/vaccination site. Like so many other vaccine recipients, Gerard reported soreness in his arm, but no other side effects.

Jim Keller, a grant writer/editor at Memorial Sloan Kettering Cancer Center and former Natural Selections Editor-in-Chief, was, like fellow employee David Jay Smith, happy to have Sloan Kettering provide vaccination appointments and administer the shots on site. Jim was not asked to keep a diary, but after the first injection, Sloan Kettering sent him a follow up questionnaire every day so that he could report any side effects. The shots did not hurt, but both times he noticed his heart rate increased. He believes this was anxiety.

And how does he feel now?

“I feel fine, both physically and emotionally. Mostly grateful to have been able to receive the vaccine so soon. Although, if I could, I would have given mine to my husband.”

Everyone I interviewed reported being glad to have received the vaccine. Even Aisha hopes “as more research develops there may be future guidance on reactions, and if it is ever deemed safe for me to receive the second dose, I will.”

Monica asked me to tell people, “Don’t be nervous to get the vaccine and ask for feedback about different locations since there seems to be varying experiences depending on where you go.”

Monica’s mom is doing very well, as are David, Bru, Ray, Ben, Gerard, and Jim. My mom has dementia, so she cannot tell me how the shot has impacted her health, but her caregivers report that she is feeling great and everyone is relieved the seniors and staff at Braemar are protected.

Let us hope we are all able to avail ourselves of this protection as soon as possible.