The Plot and the Process of Writing a Novella 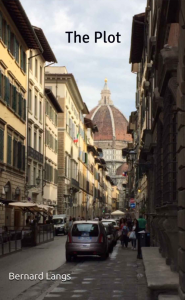 The Plot by Bernard Langs is available as a Kindle Book on Amazon at: https://www.amazon.com/Plot-Bernard-Langs-ebook/dp/B081SF5W5Q/ref=sr_1_1?dchild=1&keywords=Bernard+Langs+the+plot&qid=1614191242&s=digital-text&sr=1-1

Over the past twenty-five years, I’ve written over two dozen novellas and abandoned about a dozen others mid-creation. Each writer has their own process, and it is the process itself that is so satisfying when creating fiction. Some authors map out an outline of their plot in advance, while others maintain biographical files for each of their characters, ensuring that their motivations and behavior remain consistent with their backstories. I use a “real time” methodology by filling in details as I create images to apply over the primer coat on the canvas of imagination. This allows for events to spontaneously roll out and evolve as I act as a somewhat passive chronicler rather than omniscient power, creating the illusion that the characters maintain free will responding instinctively to unexpected situations.

My books are inspired by revelations and chance events witnessed in day-to-day life. For example, after visiting an antique arts establishment where a gallery assistant explained to me the meaning of several celestial maps engraved by Andreas Cellarius, I began writing a story centered around the magical images, with the gallery scenario setting off the action (The Lamentation for the World). While watching the James Bond film Skyfall, when Bond’s ancestral house in the wilds of Scotland appeared onscreen, I thought, “I’m going to put a ghost in that old mansion” (The Ghost of Whispering Pines).

Once I receive that spark of an idea, I intuitively sense the main characters who will undergo the book’s adventures. At times, I use personality traits of my friends or borrow perceived and implied personas from strangers I see in passing for the demeanor of individuals appearing in the novella.

Once I have the major premise in mind, I commence each writing session knowing at most two vaguely imagined scenes of action at a time so as not to get ahead of the story. I write with key phrases of dialogue and basic events at the ready prior to sitting down at the computer. I never want to know how a book will end until very late in the process. With characters behaving in a “real time” world, each personality develops naturally and interacts with new arrivals to the action, veering off in unexpected ways. Early in the writing of one of my older books, I found a secondary character taking over as the main character after realizing through his dominating actions and ideas that he was much more interesting than the original protagonist (The Minister of Peace).

My books eventually morph into complex and intriguing puzzles and after about eighty or so pages, it dawns on me how everything fits together. This unexpected “reveal” of what has unknowingly been going on the entire time is my favorite part of the creative process.

My most recent novella, The Plot, was inspired by several eureka moments that coalesced prior to committing pen to paper. While watching the sci-fi movie Annihilation, I suspended my imagination and saw the actors as they truly were—people saying lines of a script with a camera and crew lurking unseen nearby. Yet the cast was so engrossed in the setting and their roles, it was as if their space had become a reality located somewhere between our world and one of film fantasy.

Another inspiration for The Plot was a trip to London and Florence in 2018. At dinner in a restaurant in Florence, I spied a mysterious middle-aged man dining alone, obviously held in high esteem by the wait staff. I told my wife, “I don’t know what my next book is going to be about, but it’s going to begin in this restaurant with that guy at that table.” Which is exactly how it is played out in chapter one of The Plot with those very words spoken by one of the central characters.

The lead characters in the novella are Robert Halle, based on the persona of the true-to-life 58-year-old British actor, Ralph Fiennes, and his younger counterpart, Guy Randolph, based on the physical traits and personality of Leonardo DiCaprio. With an actress, Felicity Felicitas, modeled after the British star Lily James, the three are working on a free-form film directed by an innovative young Argentinian director, Alejandro Alencia, whom I created as an amalgamation of several real-life current foreign directors. Their movie is being shot in Florence with additional scenes taking place at a Palladian Villa and Hampton Court Palace in the UK. The actor Halle portrays an intelligence agent, Karl Smythe, in service to England trying to unravel the mystery of why a novel written by Randolph’s character, Justin Teagle, has set off an international crisis the nature of which has yet to be completely understood.

Robert Halle acts as the narrator of the action both as himself and as his film persona, Agent Smythe, and the reader discovers that when he and Guy Randolph undergo the best “take” of a scene, their reality as actors completely vanishes and they become unwittingly immersed into the world of Alecia’s arthouse film, The Plot. The movie characters face growing danger as the situation in the film becomes dire, and the actors are forced to gamble prior to the cry of “Action!” that they will emerge from the fantasy before any permanent harm is inflicted upon them. As the stakes grow higher in the movie they are filming, the chances increase that Halle and Randolph will lose the capacity to escape from Alencia’s fantasy, yet they are willing to risk their lives to find out what will ultimately occur in the alternative movie reality.

I knew that at some point I would have to explain the details and specifics of what lurks behind the espionage in the imaginary film world. My own understanding of where the book was ultimately going began when I caught sight from a distance of an Italian friend of mine and thought, “She knows more about Italy than I’ll ever know—she truly embodies Italy.” A new character came to life at that moment, “The Contessa,” living in a villa designed by Palladio in the Veneto who receives both spy and novelist to lay out in detail what it is that they are chasing. Days later, I spotted on the streets of Manhattan a tastefully dressed, 55-year-old woman and I introduced her as The Contessa’s counterpart, “The Madonna,” ruling mystically and benevolently over Florence within the film being shot in The Plot.

What would The Contessa reveal to be the plot of The Plot? Turned out to be another “plot,” the Pazzi Conspiracy of fifteenth century Florence where Giuliano de’ Medici was assassinated in the famous Duomo cathedral. I have no memory of creating the idea. I only recall writing the pages of passionate and dryly humorous discussion at The Contessa’s villa where she explains through an acerbic translator to the intelligence agent Smythe and novelist Teagle, the far-flung idea that although they speak together in the year 2018, Giuliano de’ Medici, her dearest nephew, is, as they speak, en route with an entourage of angelic psychopomps to his final resting place. Prior to his expected beatitude, she tells them, Giuliano is to have an audience with God and during that meeting she fears that he will take advantage of the Being’s fondness of him to encourage the deity to undergo the swift destruction of all the world. Giuliano, The Contessa notes, is convinced that Mankind’s penchant for pitiless violence and other outrages of the soul have left the species unworthy as creations of the Divine. The Contessa believes that unless Smythe and Teagle travel back to April 28, 1478 and prevent the assassination of her nephew, God will heed the call of this most beloved son of Florence and in a single immediate stroke, destroy the earth.

The Plot ends at the meeting between the two actors and the Italian actress who had portrayed The Madonna with Giuliano de’ Medici not as their film characters but as themselves. The four of them speak seated at a long snacking table inside of a New Jersey Turnpike-style rest stop somewhere in the Heavens, an oasis and illusion created to make the living interlopers feel natural and at home somewhere in the obscure reaches of the Heavens. The savvy, intellectual, and dashingly charismatic Giuliano, with selected passages of his speech translated into Italian, makes complex and salient points about the terrible and destructive behavior of Mankind throughout history. When I initially read back his diatribe, I was surprised that his impassioned observations were in no way reflective of my own thoughts on the subject, but an expression in accordance with the personality of the character of Giuliano and seemingly under his control. I had become a passive stenographer recording the presentation of his “case” against Mankind. His manner of speaking and his complex, convoluted expression of ideas made The Plot more an intellectual read than I planned when setting out to write the tale. I had wanted to present an exciting fantasy about the nature of movies and reality and now, almost out of nowhere, I had this historical banking scion arguing on moral grounds for the destruction of the human species.

Once I knew and understood what the last chapter would entail, I anticipated a very dark ending to The Plot. In the long run, I did not go through with it because I didn’t want to be responsible for a work of fiction that damns the world to instantaneous oblivion. The pleas voiced by Halle and Randolph in defense of humankind, their metaphoric “client,” make a strong counter argument in opposition to Giuliano’s damnation, centering on allowing humankind to proceed undeterred to a potentially better future or to a natural demise of its own making, rather than one guided by divine decree. The ultimate ending of The Plot is ambiguous, leaning towards the notion that Giuliano prevails after having expressed his disappointments to a “Higher Being” about humankind’s failure to fulfill ideals of love, justice, artistic expression, and scientific creativity. His greatest disappointment is how individuals lazily withdraw from the difficult task of realizing their relationship with the Divine, ceding the responsibility to various established religions as herded congregants, and handing over the vital, essential purpose of unique souls to ignorant and greedy “priestly castes” throughout history.

In March of 2021, I remain creatively exhausted from the time and work I put into the book over two years ago and there is a very good chance that The Plot will be my last novella.