The Curious Appeal of “The Innocent” in Film: Benjamin Button and Forrest Gump

The 1994 film Forrest Gump, directed by Robert Zemeckis, focuses on the life of a supposedly simple-minded man who manages to constantly find himself in the center of many historically turbulent moments during the 1960s and 1970s. Along the way, the Greenbow, Alabama native meets several presidents, sees combat action in the Vietnam war, founds a highly successful shrimping business, and literally jogs across the entire expanse of America. The movie, which won numerous Academy Awards including Best Picture, Best Actor for Tom Hanks as Gump, and Best Director for Zemeckis, is also a touching love story that tracks Gump’s childhood love of the kind-hearted and rebellious Jenny (Robin Wright) to their cathartic yet heartbreaking marriage. 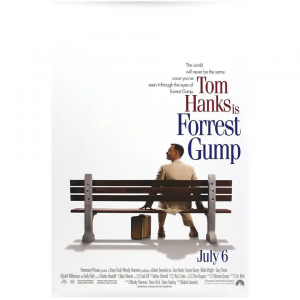 Hanks’ Gump, with his melodic southern twang and amusing range set of sayings and vocal mannerisms, is best described as an “Innocent.” He is marvelously good-natured and a steadfast friend to his war buddy Bubba (Mykelti Williamson) and the formidable Lieutenant Dan (Gary Sinise), saving the latter’s life during an intense napalm bombing during the Vietnam war. Lt. Dan later descends into despair as a double amputee war veteran, and it is through Gump’s dedication to him over many years that he emerges once more a renewed man with a fresh lease on life. Gump encouraged a similar transformation in Jenny, who struggled with disastrous self-hatred and drug abuse before finally realizing, like the savvy Lt. Dan, what is of real importance in life. Their understanding is gained by slowly awakening to the consistent, exemplary behavior of Gump, an expression of his quiet, “God-given” instinctive ethical wisdom. Gump has, through the thick and thin of all his extraordinary experiences, remained consistent to his unique self, and has the uncanny ability to brush aside constant insults and abuse about his intelligence, which he hears and quickly dismisses as of no real relevance.

The Curious Case of Benjamin Button was released in 2008 and was directed by David Fincher. Fincher’s movies always take chances and films such as Mank (2020), The Girl with the Dragon Tattoo (2011), and The Social Network (2010)  stand up to repeated viewing. Benjamin Button received numerous Oscar nominations, but won only three in minor categories. Brad Pitt, perhaps the most underrated and underappreciated actor in movie history, is absolutely stunning in the lead as Benjamin Button, a native of New Orleans raised by Queenie (Taraji P. Henson) as her own. Button’s Louisiana accent is a completely different Southern vocal characterization compared to Gump’s. Pitt’s character speaks with intonations and inflections that are music to the ear, akin to the flow of a melodic ballad softly performed by a New Orleans jazz band. Pitt masterfully rises and falls on the waves of his character’s unique and amazing life, as we witness how he is welcomed into the hearts of those he encounters on his journey. 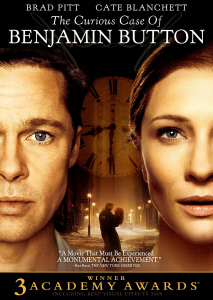 Benjamin Button is a difficult movie. The story maintains a disturbing undercurrent leaving the viewer feeling almost guilty in finding it so troublesome. Based loosely on a 1922 short story by F. Scott Fitzgerald, Benjamin Button is a lifespan fantasy of, for lack of better words, a “freak of nature,” who biologically ages in reverse, from old to young. He is born to this world and immediately abandoned as an infant-sized, shriveled, old man with the neurology of a baby. He ends his days plagued with dementia and senility in the body of a boy, finally retreating and passing away as a newborn, perhaps in his 80s or older.

Benjamin Button is presented as the most kind-hearted of “Innocents,” with quiet smarts as well as powers of observance far beyond the capabilities of Gump. Like Gump, he faces the turbulence and tumults of history, some of which are played out in the 1940s. Both characters come into their own in the 1960s and both not only survive war, but are present at the moment of the violent deaths of their closest friend in battle. Gump expresses regret that the last words he says to his best friend Bubba as he dies in Vietnam border on absurd. Captain Mike is blessed to die on a small boat at sea during a fierce battle during World War II with Button grasping his hand to comfort him. Both scenes are tearfully and emotionally staged by the two innovative film directors.

Each film was highly praised on release for its innovative use of special effects, especially Zemeckis for how he magically interjected Gump to meet three United States presidents and the late recording artist, John Lennon, using historical footage. Critics also praised Fincher’s ability to physically change Brad Pitt’s body over his trajectory from old age to youth.

Gump had his Jenny, while Button was enamored by Daisy, portrayed by the brilliant Cate Blanchett. When Button meets Daisy, they are both young children, and it’s disturbing to see the extremely old man that Button’s body maintains at that time playing with a little girl—however, the viewer is reminded that they are actually close in age and that he poses no unnatural danger to her. Their dynamic changes and evolves as they approach physical parity as she grows up and he “grows down.” Daisy’s rebellion is completely different from Jenny’s when she leaves her New Orleans hometown, but both are motivated by the enticement of discovering a larger world and embracing opportunities for excitement. Daisy enters a bohemian life as a celebrated ballerina, and her unexpected encounter with Button in the arts scene of Manhattan is reminiscent of Jenny accidently reuniting with Gump at a Washington DC anti-war rally in the 1960s. Both relationships take many more years to come to fruition as Daisy and Jenny seek out other lovers and pursuits.

Jenny chooses to run from Gump after she’s come out of her self-destructiveness. She emotionally restores herself in Greenbow at Gump’s home. When Forrest proposes to her, she softly declines:

Forrest Gump: Will you marry me? I’d make a good husband, Jenny.

Jenny: You would, Forrest.

Gump: But you won’t marry me.

Jenny: You don’t wanna marry me.

Gump: Why don’t you love me, Jenny? I’m not a smart man, but I know what love is.

It’s one of the few vocal inflections Hanks uses in the entire movie with an edge to it. The viewer is left to note, “Perhaps he is not such an ‘Innocent’ after all.” Jenny abandons her own self-hatred, and their reunification towards the film’s end comes at a bad time: after finally settling down, Jenny is doomed by what is most likely a deadly AIDS diagnosis and Gump is left to raise their child alone.

Daisy reunites with Button when her dancing career is halted after a tragic car accident. They begin a deeply loving relationship, but ironically it is Button who decides to steal away for good after they have a baby and he becomes disturbed by the idea that he, as a father, is destined to physically morph over the years to having a child-like appearance and an aging mind. The scenes Pitt subsequently traveling to obscure spots of the world and the Indian subcontinent in a spiritual quest reminded me of the adventures of the Austrian mountaineer Heinrich Harrer that Pitt portrayed in 1997’s Seven Years in Tibet.

An “Innocent” maintains an easy, positive attitude and optimism through all of life’s trials and tribulations. Such an individual cannot waver from their path because it is seemingly embedded in their DNA and naturally expressed in their unique nature. Gump and Button touch the lives of the many people they encounter with magical ease. Their relatives, lovers, and friends stand in awe and respect of the power of how a simple, easy personality is profoundly rooted in ideals, ethics, and morality, which is endearingly miraculous. Gump meets Lt. Dan in Vietnam as his war-wise, superior officer who will eventually berate him for not leaving him to die on the field of battle. In their last scene together, Dan is a surprise guest at the wedding of Gump and Jenny, and you can see the esteem in which he holds Gump. Button’s biological father, a wealthy businessman in New Orleans, surreptitiously befriends his son. He soon reveals his paternity and admits the cowardice of leaving him on Queenie’s doorstep after seeing his appearance at birth as a tiny, shriveled old man. Benjamin displays a moment of frustrated despair and anger, but soon returns to reconcile in a most wonderous way as his father is dying, carrying him to a bench where he can gaze in peace at the rising orange sun on the distant horizon across the waters of the Gulf. The way that the elder Button glances at Benjamin reveals his silent understanding of how his son has “grown down” to be a man of profound kindness, permeated head to toe by what can only be described as the natural good of “The Innocent.”