Posted on September 2, 2021 by Audrey Goldfarb

Have you ever heard the phrase “spread like wildfire”? It refers to something that quickly affects or becomes known by an increasing number of people. There has been a growing number of wildfires around the world in the last few years. It made me wonder what is causing all these fires. It seems that more people are being affected by them, but how many of us know how they happen?

The definition of a wildfire is an unintended or out of control fire in an area of vegetation. Other names are forest fires, brush fires, or wildland fires. They occur in climates that have enough moisture to allow an ample number of trees and plants to grow, but also have a sufficiently hot and arid season for the vegetation to dry and become flammable. Wildfires tend to occur during those dry periods, usually the summer and fall, and during droughts. They are said to have fronts, where the flames meet unburned material. Fronts can move as fast as 6.7 mph among trees and 14 mph in grassy areas. Sometimes air currents carry embers, also known as firebrands, past the front and start a fire in a new area, known as jumping.

Wildfires are categorized by the different fuels they consume. The most common type is the surface fire, which moves along the ground fueled by dry leaves, fallen twigs, branches, dead trees, and dead low-lying bushes.  Surface fires move slowly but can be accelerated by wind. Ground fires burn below the surface, fueled by roots and buried organic material such as peat. Usually caused by lightning, these fires tend to smolder and can last for months. Canopy fires move along the treetops and are spread by wind or vines among the trees.

Sometimes wildfires occur naturally and can be beneficial. There is evidence in the fossil record of forest fires going back millions of years since plants started to cover the land. These fires are mostly caused by lightning, and sometimes by volcanic eruptions. These fires lead to the formation of complex early seral forest habitats, or an early-stage forest before the establishment of a tree canopy. These types of habitats often have more species diversity than older forests. Some plants and trees need fire to germinate, and some animal species are dependent on those plants. The fire also helps to return nutrients to the soil. The United States’ National Parks Service will carefully monitor, but usually allow, a naturally occurring fire burn out on its own as long as there is a good barrier between the fire and occupied areas.

However, within the last few decades it’s been shown that most wildfires are caused by human activity. A study in Proceedings of the National Academy of Sciences concluded that 84% of wildfires between 1992 and 2012 were caused by people. Discarded cigarettes or matches, unattended campfires, intentional burns such as brush or crop fires, sparks from equipment such as lawn mowers or tractors, railroads, and power lines, and even arson are the causes of most wildfires today. Warming temperatures have caused more drought conditions, which has also increased the number of wildfires. The increase in dry vegetation has also led to a rise in lightning ignited wildfires. While wildfires used to occur mostly in the late summer and fall, fires caused by people can occur at any time. The fire season now averages two and a half months longer than it did in the 1970s, according to the U.S. Forest Service.

Wildfires destroy a significant amount of property and environment and have effects on the climate and human health. These fires emit carbon monoxide and dioxide, nitrogen oxides, formaldehyde, benzene, poly-aromatic hydrocarbons, and volatile organic compounds that can increase the ozone concentration. These chemicals have been shown to reach as high as the lower stratosphere, about 30,000 feet. Wildfires contribute as much as 25% of the global carbon emissions. The loss of plants then reduces the amount of carbon absorbed from the atmosphere. Chemicals released by wildfires can also be carried in the air across miles and affect people in other areas. Smoke from wildfires contains particulate matter under 0.2 µm. These particles and carbon monoxide can cause respiratory and cardiovascular problems in people exposed to them, particularly firefighters. In addition, the lack of plants and roots after a fire allows for more water runoff, and that water can pick up these chemicals and contaminate local water supplies. The open land after a fire can also allow invasive species to take over. It is evident from media reports that wildfires also lead to massive loss of residential and commercial properties, as well as human and animal lives.

Up through the early twentieth century, wildfires were detected using lookout towers. Sentries would then report the fires using telephones and even carrier pigeons. Today lookout towers are only one detection tool. There are public hotlines, ground and aerial patrols, satellite images, and drones. Since aerial photography can be of limited use due to cloud cover and low image resolution, some forests have cameras and detectors attached to trees. The detectors measure temperature, humidity, and smoke.

Wildfires are fought with water and fire retardants. These are dropped by planes and helicopters. Fire retardants are water-based solutions of ammonium phosphates and ammonium sulfates. The nitrogen and phosphate content can act as a fertilizer, helping to bring plants back to fire-ravaged areas. However, there is some question as to how the retardants affect drinking water supplies. Firefighters will sometimes create a break or fire line, to stop the fire’s spread. They will chop down trees, dig ditches, or create a line of a controlled burn to build a line with no fuel for the fire.

Current prevention strategies involve forest management, construction codes, and public education. Forests can be managed by thinning of dead and overcrowded trees, including some commercial logging. Building codes require use of fire-retardant material in buildings, selection of fire-resistant plants for landscaping, and a buffer zone between occupied areas and wild lands. The most effective means of reducing forest fires is educating people about using caution when in the great outdoors. This consists of such things as reminding people to properly dispose of cigarettes, put out a campfire, keep their yards free of debris, and listen to evacuation orders. The most famous symbol of forest fire education is Smokey the Bear, who first appeared in 1944 as part of Franklin D. Roosevelt’s fire prevention campaign. The character is now considered a cultural icon.

As of this writing, there are currently 108 fires in fifteen states. Most of these fires are in the western half of the country, including Alaska. The Dixie fire in northern California is one of eleven in that state. It has destroyed the historical gold rush town of Greenville and has spread almost 700 square miles. New York State has sent forest rangers to help fight the western wildfires. Around the world there are currently wildfires in Canada, Greece, Turkey, Italy, Spain, Bulgaria, Russia, Israel, Mongolia, and Brazil.

Global warming has increased the number of wildfires, and the fires themselves add to climate change. Hopefully increasing awareness of the causes and effects will spur people, and governments, to do more to reduce the economic and environmental losses. 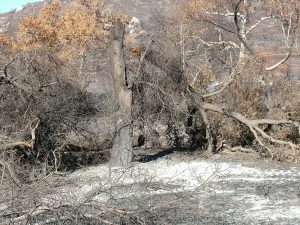 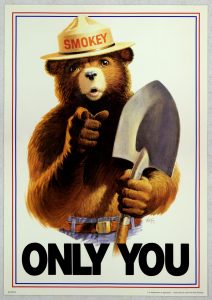 1989 Smokey the Bear poster. This work is maintained in the National Agricultural Library, in Beltsville, MD. Via Wikicommons