As loyal fans may have noticed, Pets of Tri-I was absent from our November issue. Pooja Viswanathan is moving on to a postdoctoral position at Icahn School of Medicine at Mount Sinai and sadly must leave this column behind. But never fear, dear readers; Pets of Tri-I lives on in the hands of fauna enthusiast Audrey Goldfarb! Accordingly, pet owners who would like their furry, feathered, or scaly companions to be featured should direct their correspondence to agoldfarb@rockefeller.edu.

For this issue, I interview Sylvia the cat and the rainbow fish, the unlikely roommates who live with our very own Irene Duba (Rockefeller University Ph.D. Candidate). I met Sylvia earlier this year, and we were getting along wonderfully until I accidentally stepped on her tail. I was eager to redeem our friendship after that regrettable blunder as well as to officially meet her new aquatic acquaintances. 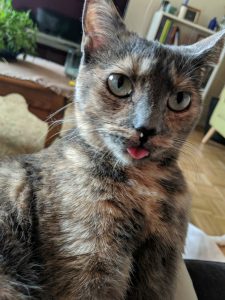 Audrey Goldfarb: How old are you? In human years?

Sylvia: Four and a half on December 10! I’m getting stressed about graying so maybe you can print that I’m actually three…?

Fish: We have no concept of the passage of time.

AG: Who was here first?

S: I have been the queen of this domain since the beginning. The others have joined my realm and I do my best to tolerate their presence.

F: This is our tank. There was no before.

AG: Do you have other roommates?

S: My pal Ben and my frenemy Barb the dog. Ben is good at snuggling and chin scratches. Barb just drools everywhere.

F: There are some snails that sometimes live with us, but they’re free spirits and frequently escape the tank to travel the world.

AG: Is there a hierarchy?

F: We try to exercise power over the snails…

AG: How do you spend your time?

S: I like to luxuriate in the sun, sniff the city air coming through the windows, and train my 10-meter dash up and down the hallway. Sometimes I pull pranks on Barb. She’s the village idiot.

F: We swim left, and sometimes we swim right. 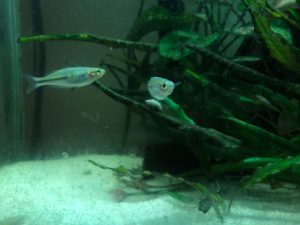 AG: What are your favorite foods?

S: I need my daily dose of faucet water—if it’s close to bedtime and I haven’t gotten my slurps in, you WILL hear about it.

F: We go crazy for flakes. Brown flakes, red flakes, you name it.

AG: What did you think of each other when you first met?

F: We admit we were glad there’s a glass wall between us and Sylvia!

AG: In this time of anthro-polarization, how do you set an example of peaceful coexistence as traditionally antagonistic species?

S: I choose not to eat the fish.

F: We swim left, and sometimes we swim right.

AG: What is your favorite thing about yourself?

S: I’m an excellent singer. Not many people know this about me. I’m a big fan of musicals. When I try to practice with Irene, she just gives me more food…I take that as encouragement.

F: We can swim from one end of the tank to the other at record speeds. You should feel the wake we leave in our path. Not to brag, but we are very good. 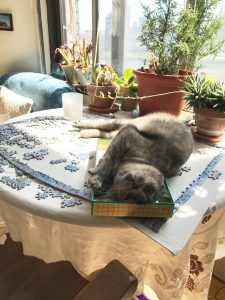 Sylvia is also proud of her ability to think outside the box when it comes to sunbathing.

AG: If you could adopt one trait or ability from each other, what would it be?

S: It’d be great if there were eight of me.

F: She is an incredible napper. We wish we could nap like her. 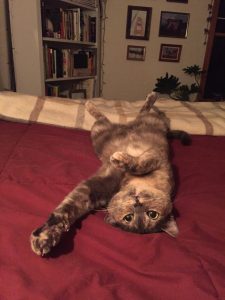 Maximizing surface area is the key to effective napping and basking, Sylvia says.

AG: How did you first meet your human?

S: Irene and her housemates brought me home from the shelter I was living in as a kitten. It was RAINING when we went outside, and I was NOT HAPPY. I still haven’t forgiven Irene for that.

F: We were at the fish store and we got put in a big bag. We sloshed all over inside the bag on a very bumpy bus ride home. But then Irene put us in a tank with fun plants and rocks, so we forgive her.

AG: What is your favorite thing about your human?

F: She brings us flakes and for that we are forever grateful.

AG: What is your purpose in life?

S: To run the household.

F: Keep the snails in order. It’s an endless chore.

AG: If you could write the rules for your apartment, what would you implement or change?

S: Barb should no longer be allowed to use me as a pillow. Oh, and the faucets should always be slightly on.

F: Sylvia shouldn’t be allowed to look at us like food…that would make us feel much better. 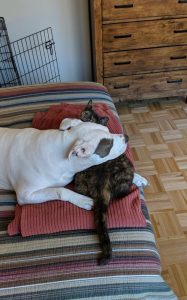 “Can you believe this blatant disregard for my authority?”

AG: What is the weirdest thing that has happened in this apartment?

F: Every now and then the tank gets cleaned and it’s absolutely traumatizing

AG: What would Irene do without you?

S: I ask myself that all the time.

F: I guess she’d just give all the flakes to someone else…I don’t like to think about this…next question please.

This entry was posted in Humor, Pets of Tri-I. Bookmark the permalink.