New Year’s Eve is coming up. Along with the fun of going to parties and drinking champagne, many observe the tradition of making resolutions. Why do we feel we need to vow to improve our lives at the beginning of each year? It turns out people have been doing this in some form for over 4,000 years.

This tradition started with the ancient Babylonians, in what is now southern Iraq, around 2000 B.C. Their calendar year started in the beginning of the spring planting season, approximately equivalent to March 20. An agricultural society, they would bargain with their gods for a successful harvest. They would make promises to repay debts and return borrowed items. If one didn’t keep their promise, they would fall out of favor with the gods. 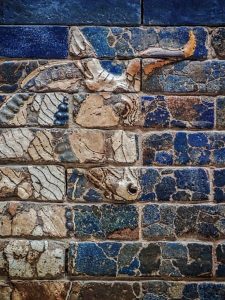 One of the gods of ancient Babylon, An Auroch symbol of Adad (Hadad) storm and rain god of ancient Mesopotamian religions on the Ishtar Gate of Babylon 575 B.C.E. Wikicommons.

Judaism has had a similar tradition for nearly as long. The Hebrew calendar year begins at the end of the harvest, Rosh Hashanah. The holy days culminate at Yom Kippur, the Day of Atonement and seeking forgiveness. It is considered a time to contemplate the past year and have a fresh start in the next.

The ancient Romans also had their own form of New Year’s resolutions. Julius Caesar established the calendar we use today in 45 B.C. The month of January was named after Janus, a two-faced god always looking forward and backward. Therefore January was considered a time for introspection, sacrifices to Janus, and vows to behave better. 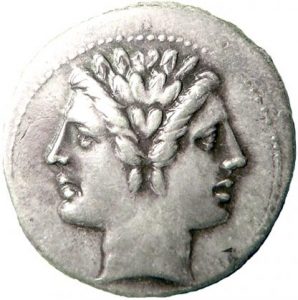 Coin depicting Janus, who is the god of the New Year and the first month of the year. Dailyhistory.org.

During the Middle Ages, knights would renew their vow of chivalrous conduct at the end of the year, also known as the “peacock vow.” They would place their hands on a live or cooked peacock, or pheasant, while making this oath, thus the name.

In 1740, the English pastor who founded the Methodist church, John Wesley, started a service called “watch night.” On New Year’s Eve, he would have congregants stay in the church reading bible verses and singing hymns. They were encouraged to reflect on themselves and vow to avoid sin in the coming year. It was offered as an alternative to wild New Year’s Eve parties and is still practiced in some Protestant churches today.

The term “resolution” in this context first appeared in the mid-1700s in an article in Walker’s Hibernian Magazine. The article encouraged people to make their resolutions at New Year’s and gave many suggestions. The phrase “New Year’s resolution” first appeared in a Boston newspaper in 1813. This practice started to become more secular in the 1800s. For example, people in England at that time would vow to have more children or achieve a higher social status. In the early part of the twentieth century, only about 25% of Americans made New Year’s resolutions. Today about 45% of Americans make resolutions, with weight loss being the most common, but only a reported 8% succeed in keeping them.

The tradition of making New Year’s resolutions has evolved over thousands of years from bargaining with a pagan deity for a good crop yield to making promises to ourselves regarding various aspects of self-improvement. Today most Americans vow to improve some aspect of their health, education, finances, or relationships. Perhaps the current global pandemic may evolve this practice even more. 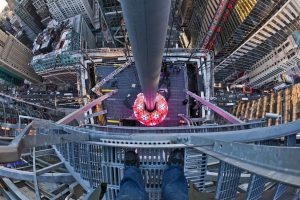 This entry was posted in Health, Uncategorized. Bookmark the permalink.