Father’s Day this year is June 20. Founded by a woman who was raised by her widowed father, it has been celebrated in this country on the third Sunday in June for almost a hundred years.  Despite its popularity, it took more than sixty years to be recognized as a federal holiday in the United States. 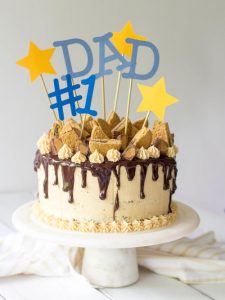 Sonora Smart Dodd is the person credited with starting the Father’s Day tradition we now practice in the United States. She was born in 1882 in Arkansas to Civil War veteran William Smart and his wife Ellen. The family moved to a farm outside of Spokane, Washington in 1889. In 1898 Sonora’s mother died giving birth to her sixth child. William raised all six children with the help of his only daughter. Sonora later married John Dodd. In 1909 she heard a church sermon about the newly established holiday, Mother’s Day. She felt strongly that men like her father should be honored, too. She approached church ministers about having such a day on June 5, her father’s birthday. The ministers felt they didn’t have enough time by that day, so they held it on June 19, 1910, the third Sunday of that June. Dodd also appealed to shopkeepers, the YMCA, and politicians. During the 1920s Dodd attended the Art Institute of Chicago, but after graduation she returned to Spokane and again worked to get support for and promote her idea.

In 1913 a bill declaring Father’s Day was introduced in Congress but did not pass due to fears that it was just a commercial holiday. In 1916 President Woodrow Wilson celebrated by sending a telegraph to Spokane to raise some flags. He also supported making Father’s Day a holiday but couldn’t get it passed. President Calvin Coolidge recommended making it a holiday in 1924, but never issued a proclamation. In 1966, President Lyndon Johnson issued a presidential proclamation honoring fathers on the third Sunday in June. Finally in 1972, sixty-three years after Dodd first started petitioning, President Richard Nixon made Father’s Day an official federal holiday.

There was evidence for the politicians’ fear of commercialization of the holiday. Even when Dodd first started promoting the holiday, she had the help of several trade associations, who realized that they could benefit from a new holiday, particularly manufacturers of menswear and tobacco. The Great Depression spurred retailers to further promote men’s gifts for that day. By the 1980s the Father’s Day Council noted that it was a “second Christmas for the men’s gift-oriented industries.”

Some sources claim that the tradition of Father’s Day was started in West Virginia, but this is not the case. In December of 1907, a coal mine exploded in Monongah, West Virginia. Over three hundred men were killed. The following spring, Grace Golden Clayton proposed a service in her church to honor all the fathers among the victims. It was only meant to be a one-time event, held on July 5, 1908. The sermon was never published, the event was never promoted beyond that specific date and town. It wasn’t celebrated again until many years later when Father’s Day had become popular.

Many European countries celebrate fatherhood on March 19, also known as Saint Joseph’s Day. The Catholic Church promoted this custom as far back as 1508. Early Spanish and Portuguese immigrants continued this tradition here. Many other countries around the world have taken up the American-style celebration of Father’s Day in June. Germany has had a unique practice since the 1700s. They celebrate a men’s day or gentleman’s day on Ascension Thursday, which is forty days after Easter. Groups of men will walk to some destination pulling a wagon full of wine and beer bottles and some provincial food, usually including ham. This goes back to an old farming tradition where a town would recognize the man with the most children with a prize. During the twentieth century, the tradition had become an excuse to drink heavily. Germany’s Federal Statistical Office reports that traffic accidents increase by threefold that day.

Today the practice in the United States is to give one’s father conventionally gender-oriented gifts such as ties, tools, or sports gear. Some families may get together for a Father’s Day brunch or cook-out. And there are many greeting cards sent each year. It will be interesting to see how the holiday evolves in the future. 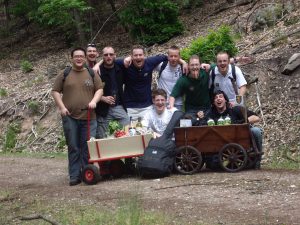