Dr. Sidney Strickland on the Changing of the Guard

Posted on September 2, 2021 by Audrey Goldfarb

On July 9, 2021, Dr. Sidney Strickland made the announcement that he will step down as the Dean of Graduate and Postgraduate Studies in the next few months. Since many members of our community were surprised to learn of this changing of the guard, I decided to meet with Dr. Strickland virtually to ask a few questions and reminisce about his incredible twenty-one-year tenure:

I think a lot of people were surprised when you announced that you were stepping down. Can you please talk about what made you decide to end your tenure as the Dean after so many years?

I just think it’s good for the program to have some turnover, and probably more often than every twenty-one years. New people come in, they have new ideas, new approaches—it’s stimulating! And I think I’ve really loved doing the job, I’ve enjoyed it tremendously, but there is also the fact that I would like to spend a little more time concentrating on the lab. So those factors combined just made me think it was time. There was no push, I was still enjoying it, but when you do something for a long time, there is certain inertia that sets in, and you want to avoid that.

It’s been a very long tenure for you, and looking back on it, are there any periods of time or specific events that really stand out to you?

Not really. But I think we have made a lot of progress in creating an institutional safety net for the students. I’ve been involved with the graduate program going back to 1973, and it’s always been a fantastic place to be for graduate students. Almost invariably the PIs are good mentors, they care about their students, they are doing superb science, and it works well. But what didn’t exist in the early days or fifty years ago, was a kind of institutional security. Students can have problems for all reasons—it’s not just scientific. It’s health, it’s family matters, it’s whatever interferes with people’s lives, all these issues. So, I think we instituted a way for the students to feel like they have somebody at the institutional level, not their PI level, to help them through hard times. And I think it was very important because in the very old days that didn’t exist, so people could get a little bit lost and not know what to do.

I agree. As a student myself, I can really appreciate that support that we get from the Dean’s Office. And speaking of other notable experiences, was there something that you really enjoyed about being the Dean? What was your favorite part of the job?

Definitely my favorite part is interacting with the students. I know them all, as you know, and I have become friends with some of them. Some of those friendships have endured for a long, long time. Some of the students that came in on my watch have become very accomplished. There is Vanessa Ruta, I was the Dean when she was a student. She and I became very friendly even when she was a student, and I recognized her incredible talents. There was also Paul Cohen, Kivanç Birsoy, and Agata Smogorzewska. So, it’s basically been interacting with the students. I have learned from them scientifically and also just about other things. If they are international, I learned about their home countries (I find that tremendously interesting), their life, their hobbies, all that sort of stuff, so it’s definitely been interacting with the students. I really love that. And I actually don’t want to give that up—I want to try to do some teaching and still have some interaction with the student population.

I am sure that students will appreciate your continued involvement. On the other hand, was there anything that was really challenging for you?

There is nothing that stands out. There are issues that come up that are difficult, every year there are really difficult issues. But the great thing about Rockefeller is that it’s so small, you can deal with everything on an individualized basis. People would warn me at the very beginning when I started. Let’s suppose that the student really wanted to do something out of the ordinary, and they would ask me if they could do it, and people would say, “Well, if you do it for that person, you will have to do it for everyone.” But it turns out, if you have 200 students, that’s really not true. If a student wants to go to an extra meeting because it’s right in line with their thesis work and would be incredibly valuable, we can give them a leeway to go to that meeting with the Dean’s Office support. But not everybody is going to be lined up to do it or want to do it.  So, I think it’s made it a lot easier to deal with the challenging things, the fact that we can be so individualized. You know, you can’t do that if you have 20,000 graduate students. But you have 200, you can do that. So, I would say, the challenging moments were challenging, but I think we can usually work through them fairly successfully.

And I don’t know if you have given this any thought, but do you know who you would prefer to see as your successor? Not necessarily a specific person, but what kind of qualities should that person possess to be able to do the job just as well?

I think it’s pretty obvious—you want somebody who is interested in the welfare of the students, who is supportive. And this really betrays my own prejudices: I do love the flexibility of the program; students can do what they want. For me, it would be too bad to get someone in who is extremely bureaucratic, rule-bound, and wanted to set up a very different structure. I am not saying that wouldn’t be good, but it’s not what’s giving the program a special flavor. I would hope that person would celebrate our flexibility and the independence that we give students and try to keep that going.

I truly hope so too! Is there anything that you think your successor should try and change?

It’s pretty difficult—since I have been doing it for twenty-one years, if there was something that we should change, I should have changed it. I’m sure there are things—I’m not sure what exactly they will be. But someone with a new approach will look at it and say, “We can do it a lot better.” And I anticipate that, I welcome that. One of the reasons you want to get turnover is that someone will come in with a fresh view.

Do you have any scoop on how the search is going?

It’s just in its early stages, so I don’t really have any scoop. I don’t really know what they’re thinking. I have interviewed with a search firm, to give them my take on the situation. It’s a great job because the administration has always been extremely supportive of the graduate program. Jim Lapple, who is our Chief Financial Officer, has always been willing to give us extra funds to do something special, if we make a case for it. If we tell him that something could be really important for the students, that we want to do it, that it’s going to be expensive, Jim has never hesitated. All the rest of the administration, all the way up and down the line, has been supportive. So, it’s a great job because you have a tremendously talented group of students, you have a lot of resources to do special things, a beautiful campus, and a good working relationship with the faculty and with the administration. So, I think they will be able to attract somebody really good.

You mentioned earlier that you wanted to focus more on your lab. Is there anything else that you are looking forward to now that you have this newly found freedom?

I’m sure everybody knows that my great hobby is music. So, I don’t expect to become a lead guitarist for a rock band, but I wouldn’t mind spending a little more time on my guitar skills. Other than that, just working with the lab because that is something that I still tremendously enjoy. After all these years, I still love trying to figure out what goes right and what goes wrong in the body or in biology, I might say.

Is there anything else that you would like to leave our readers with?

No, just tell them that I’m looking forward to the student retreat.

Oh definitely! I’ll be there. 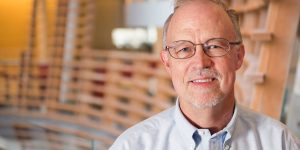