Culture Corner: Stories of Individual Change and Redemption in Movies

A scorpion and a frog meet on the bank of a stream and the scorpion asks the frog to carry him across on its back. The frog asks, “How do I know you won’t sting me?” The scorpion says, “Because if I do, I will die too.” The frog is satisfied, and they set out, but midstream, the scorpion stings the frog. The frog feels the onset of paralysis and starts to sink, knowing they both will drown, but has just enough time to gasp “Why?” The scorpion replies: “It’s my nature…”   – The Fable of The Scorpion and The Frog

There are countless films and television shows that document the trajectory of characters initially introduced with overbearing and seemingly insurmountable negative qualities in their personalities who, over the course of the story, gradually morph into more ethical and better versions of themselves. These tales of self-discovery deliver positive, hopeful affirmations that we are all capable of making changes amid newfound understandings of our inner natures.

The King of Staten Island (2020), directed by Judd Apatow, follows a 24-year-old man (played by Pete Davidson) struggling with Attention Deficit Disorder and frequent flare-ups of mental illness. Amid life’s pressures, he is unable to control his inner demons and transition from an adolescent mindset to that of a responsible adult. Davidson’s character, loosely based on his own experiences after the loss of his firefighter father in the 9/11 attack, never accepts and comes to terms with the death of his dad (also a firefighter in the film) at age seven, arresting his growth and development. While continuously making a mess of his own life, he drags down the life of his well-adjusted, academic sister and sabotages his mother’s first relationship since the death of her husband. He also takes advantage of the young woman who loves him as she tries again and again to make him realize his potential and do something productive with his talents. As I watched the movie, I kept wondering if he’d ever change for the better and fix the terrible mess he’d created. I also speculated on how a shift in personality would be presented believably by Apatow, given the massive scope of the protagonist’s destructive behavior. When Davidson’s character finally begins to mature and comprehend the depth of what he’s done to family and friends, it’s cathartic to watch him succeed in making believable amends. 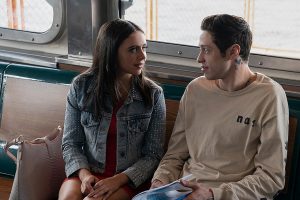 Pete Davidson on the Staten Island Ferry with Bel Powley in The King of Staten Island (2020); photo: Universal Pictures from: https://screencrush.com/the-king-of-staten-island-review/

The late German philosopher, Theodor W. Adorno, mocked American movie culture for providing plot lines where the audience knows either from the start or quite quickly how it’s going to turn out in the end, which he believed showcases the simplicity and mindlessness of the genre. I don’t mind realizing where a movie is heading, the beauty for me is in the details and originality of how each director presents stories of love, drama, laughter, and action, and at times, salvation. Films using admittedly well-worn concepts can be viewed as uniquely conceived if they present new twists and turns to tales of our timeless struggles, providing fresh emotional expression of our common humanity.

Some of my favorite movies depicting unique characters who change over the course of the story include: Blood Diamond, 10 Billboards Outside Ebbing Missouri, Lord of the Rings, American Hustle, Star Wars, Mad Max: Fury Road, and the 1951 version of A Christmas Carol. I find the greatest and most stunning moment of terrific self-knowledge initiating a reversal of ideals occurs in the ending sequence of the 1957 epic war film directed by David Lean, Bridge on the River Kwai. In this moment, Colonel Nicholson (Alec Guinness) mutters with horror, “What have I done?”, comprehending that the bridge he’s helped construct with fellow prisoners of war during World War II has value only in terms of “aiding and abetting the enemy.” The boastful pride of what they’ve created turns to horror when he finally understands what was obvious all along: the bridge will be used for troop and weapons transport by the Japanese and will cost Allied lives—and that it has to be destroyed immediately.

Alec Guinness asks himself “What have I done?” in Bridge on the River Kwai (1957)

My favorite story documenting an admirable progressive inner change is Groundhog Day, the 1993 classic fantasy featuring Bill Murray as an acerbic, jaded television weatherman forced to reckon with himself as he’s stuck in a time loop of endless repetition of the same day, February 2. In addition to being extraordinarily funny and downright clever, the movie points to larger truths and lessons. The understandings that Murray slowly fathoms are presented in a manner that make them plausible and believable, even within the ridiculous parameters of the outlandish surreal world he inhabits. It’s a beautiful thing to behold as he finally emerges, embracing life and new-found love. 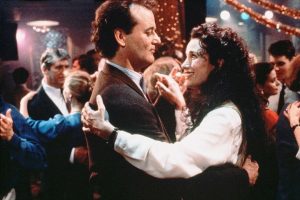 Life differs from art, but many of us have long-time friends we’ve seen grow out of their more destructive traits to embrace better ones, resulting in a less stressful relationship and a renewed bond. As individuals, it can be very difficult to forgive ourselves for things we have said or done in the past that leave us with deeply-held, often bitter, regret. To change one’s life and personality for the better can at times be a slow, difficult process taking years of struggle and constant self-awareness, while keeping a diligent eye out for relapses to past destructive patterns of behavior and thinking. Storytelling can provide an almost magical and profound hope that we can change our inner being, our unique natures, arresting the unfounded belief that our worst faults and actions are genetically impossible to prevent from expression, and the idea that at times we can’t help but act solely with innate and fixed responses, impossible to unlearn. The “nature” aspect of the “Nature or Nurture” debate should not be used as an excuse to acquiesce and surrender to the notion that we carry personality traits beyond the control of free will, choice, and reason.

Rare is the case of a human soul that behaves as the Scorpion, knowingly and unremittingly taking himself down to a watery grave along with the kindhearted frog. It is worth remembering that as murderous and unchangeable the nature of the scorpion is in the fable, the frog displays the characteristic of trust, and we should not lose heart that this inner purity of spirit finishes him off in the end. Our movies, television shows, and novels are filled with countless tales of “scorpions” who end up reversing course midstream to save the day in creatively wondrous, exciting, and moving ways.