Posted on November 2, 2020 by Audrey Goldfarb

Even if you’re still working from home, by now you have heard that Charles M. Rice, Ph.D. (or “Charlie,” as many call him at Rockefeller) is one of the recipients of the 2020 Nobel Prize in Physiology or Medicine along with Harvey J. Alter (National Institutes of Health) and Michael Houghton (University of Alberta) for research that contributed to a cure for hepatitis C.

Nearly every congratulatory statement by Rice’s colleagues mentioned his exceptional kindness, a quality sometimes regarded as mutually exclusive with the pinnacle of career success. I spoke with Santa Maria Pecoraro Di Vittorio, the Administrative Manager of the Rice Lab, to gain further insight into Rice’s professional reputation and demeanor. I found that it is no facade—Rice is exactly who you would expect him to be: a well-rounded, hardworking scientist, with a penchant for dark chocolate and classical music, who is well-liked, respected, and admired by his employees and peers.

Pecoraro Di Vittorio came to Rockefeller more than fifteen years ago to join her then-fiancé Salvatore Di Vittorio who had been preparing to launch the Chamber Orchestra of New York, “[New York] made the most sense for both of us professionally,” Pecoraro Di Vittorio explained over e-mail, “It was my first big move, but everything actually fell into place.”

Two colleagues at the Torrey Pines Institute for Molecular Studies with knowledge of Rice’s character and reputation encouraged Pecoraro Di Vittorio to apply to his laboratory and even facilitated an introduction between them. Soon after, Pecoraro Di Vittorio found herself on a flight to NYC to interview with Rice. She recalled, “It was a campus holiday [President’s Day of 2005], but as in typical Charlie fashion, he was there working away, along with some lab members and his Australian Shepherds, Wrangler and Sadie.” Pecoraro Di Vittorio started in the Rice lab a few weeks later in March 2005. “It turns out they were having trouble finding someone for the position, so you can say I was looking at the right time. This was the only position I applied for. (I had just started my search! Lucky break!).”

Pecoraro Di Vittorio now oversees grants, finance, personnel, and other administrative duties for the lab. She described Rice as, “A generous and dedicated scientist and professor. He is incredibly thoughtful when writing letters of recommendation.” Pecoraro Di Vittorio continued by saying that working for him is “an amazing experience,” and added, “He works incredibly hard. He is passionate about the lab’s research and wants everyone to excel and succeed in their projects and careers.”

Pecoraro Di Vittorio recalled the 60th birthday symposium that the lab organized for Rice on August 25, 2012, in Caspary Auditorium, with 166 attendees. “He experienced a wonderful reunion of past and present students, postdocs, and colleagues. His undergraduate and graduate advisors were even present,” she said. “He was really happy.”

When the Nobel Assembly came knocking, it was not completely unexpected. “There was quite a bit of chatter by lab members about this potentially happening especially after he was awarded the Lasker in 2016,” Pecoraro Di Vittorio said.

Indeed, the Lasker-DeBakey Clinical Medical Research Award, one of four awards given by the Lasker Foundation, is presented to honor outstanding work for the understanding, diagnosis, prevention, treatment, and cure of disease, and it is often viewed in the research community as a precursor for the Nobel Prize. So, as that fateful day, Monday, October 5 approached, just as in the last three years, Pecoraro Di Vittorio’s office was contacted to ask about Rice’s schedule on the day of the Nobel Prize announcement. As Rice indicated in the press conference that Rockefeller held following the announcement, at first, he ignored the call, suspecting it was a prank. But the calls kept coming, and Rice acquiesced and answered the phone to a Swedish accent.

Between his time at Washington University School of Medicine and Rockefeller, Rice has had thirty-four graduate students, helped train ninety-six postdocs, and has had a total of 338 lab members at Rockefeller alone. Accordingly, many alumni were anxious to congratulate Rice, so Pecoraro Di Vittorio organized a video conference meeting the following day with upwards of ninety participants. The meeting lasted almost three hours.

Pecoraro Di Vittorio could not comment on the Nobel Assembly’s plans for presenting the three scientists with their awards, virtually or in-person. “This is still being discussed between the Nobel Foundation and the winners,” she said.

When all is said and done, Pecoraro Di Vittorio believes that Rice’s receipt of this highest honor in science will not affect the day-to-day work of the lab. On the morning of the Nobel Prize announcement, “He sent an email to the lab’s COVID research group list around 5:30 a.m. only with the subject line ‘Do not get distracted!!!’” Pecoraro Di Vittorio said. “Many lab members responded that it was too late!”

Rice is the 26th scientist associated with The Rockefeller University to be honored with the Nobel Prize. In addition, four other Nobel Prize winners are current members of the Rockefeller faculty: Michael W. Young (2017), Roderick MacKinnon (2003), Paul Nurse (2001), and Torsten Wiesel (1981).

Born in Sacramento, California in 1952, Rice received his Ph.D. in biochemistry in 1981 from the California Institute of Technology, where he stayed on as a postdoctoral research fellow from 1981 to 1985. Before he joined Rockefeller in 2001, he spent fourteen years on the faculty of the Washington University School of Medicine. He is a member of the National Academy of Sciences and a previous recipient of the 2007 M.W. Beijerinck Virology Prize, the 2015 Robert Koch Award, the 2016 InBev-Baillet Latour Health Prize, and the 2016 Lasker-DeBakey Clinical Medical Research Award. 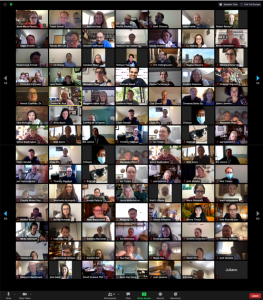 Merged screenshot showing many of the attendees at the congratulatory video conference. 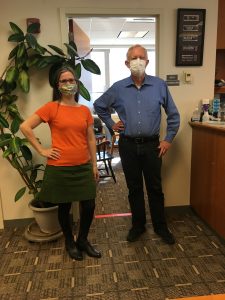